Harry and Carrie
By Bryan Cohen
Today I went to see the last Harry Potter movie on the big screen with a trio of comedians. It's always an amazing experience getting to see a blockbuster flick with friends who have a huge sense of humor. An unintentionally silly scene (Voldemort's laugh in front of Hogwarts towards the end comes to mind) causes a whisper giggle riot when among such company. One of these comedians, who happens to be my favorite female comic in the city of Chicago, Carrie, also went through an entire container of tissues due to a never-ending stream of tears.
Comedians in Chicago are an interesting bunch. Having been involved in so many ridiculous scenes during improvisational and sketch comedy scenes, it's hard for something to really impact us emotionally. I looked over at Carrie and thought, "J.K. Rowling made a comedian weep. That's amazing!"
Obviously, the author of the best-selling series of the century has touched a nerve with many people. It wouldn't be breaking all sorts of book sales and movie box office records if it hadn't. But the fact that even in people who tend to have guarded emotions, this series breaks through to the heart is a true achievement.
In creating a series of my own, starting with i laugh. I wanted the characters to be entertaining and for their adventures to make people want to keep turning the pages. As the series continues, I want to make sure I keep in mind my weeping comedian friend. If an audience is truly invested in a character, it actually feels the emotions that the characters are feeling. Readers will laugh and cry right along with those characters.

Ted Saves the World includes some fun characters that I hope will touch audiences over the course of multiple books. While they may not reach the pinnacle of a connection between Harry and Carrie, I will always have that fantastic reader to character relationship to draw from for inspiration. 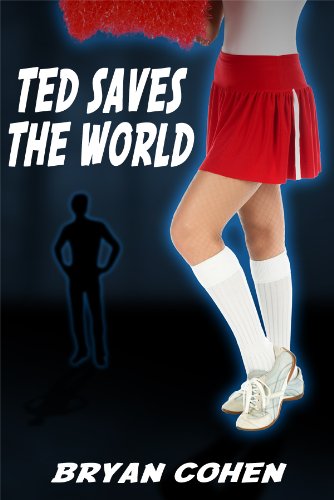 Description of Ted Saves the World (Available for just $0.99):
A possessed cheerleader. A cursed gang of criminals. Mysterious telekinetic powers. An angry ex-girlfriend in gym class? One second, sophomore in high school Ted endures his first breakup in his favorite place in town. The next, a mysterious blue light turns him into a worldwide superhero sensation for taking down a posse of grisly murderers. As his views on YouTube increase and his friend Dhiraj tries to capitalize on the marketing potential, his dangers increase as well when a presumed-dead cheerleader begins taking a personal interest. Can Ted survive his first week as a superhero in the public eye? This novella is the first taste in a series of full-length novels about the adventures of Ted Finley and Erica LaPlante. The book is also available on Barnes & Noble and Smashwords for $0.99.


Giveaway:
Bryan Cohen is giving away four $25 Amazon gift cards, one for each week of his month long blog tour. To enter, simply comment with your e-mail address (feel free to substitute @ with (at) or other tricks to stop spammers from getting it). Bryan will draw the four names at the end of the tour, picking one entrant at random from each week’s set of blog posts. Entries will be counted through Monday, August 15th, 2011. Enter on as many sites as you want, follow the tour at Build Creative Writing Ideas. If Ted reaches the Top 100 on Amazon at any point during the tour, a fifth $25 card will be added to the giveaway.

Biography:
Bryan Cohen is a writer, actor and comedian from Dresher, Pennsylvania. He graduated from the University of North Carolina at Chapel Hill in 2005 with degrees in English and Dramatic Art and a minor in Creative Writing. He has written seven books including 1,000 Creative Writing Prompts: Ideas for Blogs, Scripts, Stories and More. Contact Bryan through his Ted Saves the World blog, his Build Creative Writing Ideas site or Twitter.
Posted by Read for your future! at 6:12 PM