Interview and Giveaway: Dawn McCullough-White author of Cameo and the Vampire (Trilogy of Shadows Book 3) 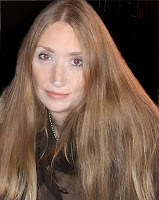 Interview:
Today we have Dawn stopping by to give us a chance to find out a little bit more about her and her book,
1. Is this the last in the series or will there be more?
This is the last book in this trilogy yes, although I am currently working on a second trilogy that takes place in the same world, fifteen years after “The Trilogy of Shadows” ends. With some of the favorite characters from this series making appearances.

2. How did you come up with the concept for “Cameo and the Vampire”?
Really, the way it tends to work for me, and for several other authors I know, is, a novel or a series is like a big puzzle and I get these visions of characters having conversations, or feelings about what happened in a character's life that helped shape him or her, and then all the pieces fall together after a while. So, ideas I had about the story may have been there at the very beginning and as the tale unfolds I have these “aha” moments where I realize “oh my gosh, this story is going to end up using that offhanded idea I had years ago when I first thought this whole thing up!” It's very strange how it works. I use a very loose set of notes.

3. How did you come up with the names for the characters?
I think of a character, and start mulling over the idea of who the person is. This can go on a long time. Part of the process is naming them. In a very spiritual way it's sort of like pulling someone out of the void. I will usually just write down a few names on a paper that are like the sound of who I think the character is. Another thing I do is, when I travel and see names of streets or towns that I like I make a note and keep them for future name ideas for novels. The name “Haffef”, the evil vampire in the series, comes directly from a time I was using an Ouija board when I was a teenager. The original spelling was more like Hafefefefefefefef until the planchette fell off the board. It was such a creepy session I kept that name in mind for the creepy character.

4. How much are you and the characters alike?
Well, I'm the narrator's voice, so reading my novels are a bit like reading my diary. I'd say that I'm the most like Cameo and Black Opal on some level. I have some of Opal's endearingly annoying characteristics, and his optimism. Cameo, cold and hard as she can be, has a lot of empathy for others too and I'd love to think that is me, someone who cannot bear to kill an insect because I hate the way it feels. If you combined these two characters and added in Kyrian's spiritually you would get me more or less... minus the bloodshed.

5. Do you read a lot and what are you reading now?-
I'm a binge reader. I won't read for months and then I'll get into a series or something and devour it. I'm currently reading “Jamaica Inn” by Daphne du Maurier.

6. What made you decide to go vampires?
I've been into vampires since I was 6 yrs old (1976) and watching the reruns of Dark Shadows at my aunt's house. My Aunt Ruth is really to blame for my interest in vampires, she started me young. It was only natural that vampires would play some part of my novels, although it was never an intentional plan really. It grew organically. I did not sit down and think to myself, “I'm going to write a book with vampire characters”. It just happens to be the way I express myself- with vampires, antiheroes and cutthroats...

7. How did the cover come about?
I asked the cover artist, Kurt Hanss, if he could give me a close up of Haffef's face, and make him look really evil, something with his mouth wide open and weird (I had to check my email to see what I said exactly).

8. So what is your next project and when is it due out?
The next thing I have coming out is a short story, featuring one of the characters from the Trilogy of Shadows, coming out in an anthology in February 2012. It's called: The Gate 2: 13 Tales of Isolation and Despair. I'm currently writing the first book for a second, yet to be named, trilogy.

9. Do you have a day job or are you a full time writer?
I have a day job. I am a stay at home mom to my 4yr old son. I make time to write from 10pm to Midnight or so, most nights.

10. How did you get into writing novels and were you worried about peoples reactions to your books?
I wrote my first novel when I was fourteen. How did I get into it? Well, a TV show I used to really enjoy, at the time, went off the air but I wanted more episodes so I started making up more ideas for the show. Essentially what I wrote was a full length fan-fiction novel, at the time I had no idea what that was though. I was just enjoying myself.
Yes, I was worried about reactions to my stories about Cameo. I wrote several other novels about Cameo before settling on the one I ultimately published. In the other novels she had no redeeming qualities which I didn't feel would work for a protagonist, but I didn't want to change who the character was, so I made her more mysterious instead. That way, you know she did some terrible things, but I didn't center the story on that.

11. One last thing, do you collect anything personally?
Lately I've been collecting every film Robert Newton ever appeared in. I'm completely fascinated by him, not sure why.

Thanks to Dawn for stopping by and visiting with us today. Dawn is giving a way a SET of her Ebooks.
Check out below for your chance to enter.
Rafflecopter below


Share this Widget
Posted by Read for your future! at 8:45 PM