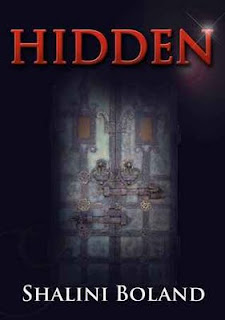 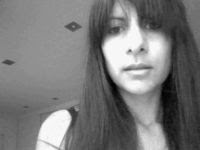 Welcome Shalini to our Blog thank you for stopping by!
1.How did you come up with the concept for this book?
The inspiration for Hidden came from a newspaper article about a family who had to leave their house due to a bat infestation. There was a local outcry as the bats were protected by law and the family could no longer live there. I thought: Hmm, bats in the attic … how about vampires in the basement?
I used to live in a very old house in London which had a large basement, very much like the one in my novel. I was always terrified of going down there and I can still remember the musty smell and the grey stone walls. It wasn't hard to imagine all kinds of terrible things lurking down there - awful creatures, ghosts, things bricked up in the wall...

2. How did you come up with the names for the characters? Strangely, the names were very easy with this novel. The characters were pretty much fully formed in my mind, names and all!

3.How much are you and the characters alike?
Madison Greene says all the stuff I was too scared to say at school. She’s probably my alter ego. So I’m not really like her, but I understand where she’s coming from.

4.Do you read a lot and what are you reading now?
I’m a readaholic, but my reading has suffered since I started writing novels – there’s not enough time to do both! I’ve just finished Becoming Edward by Faye Meredith, about a boy who tries to be like Edward Cullen to get a Twihard girl - it's brilliant! And I’m about a third of the way through December Moon by Suzy Turner (Book 2 in the awesome 'Raven Saga').

5.What made you decide to go vampires?
Ever since I read Anne Rice’s Interview with the Vampire series I’ve been hooked on vamps. It’s pure escapism – horror, romance and the whole forbidden love thing. But I didn’t consciously set out to write a vampire series. The story just came to me and I had to write it down.

6. How did the cover come about?
One of the key scenes in the novel is where Madison discovers the hidden door and I knew I wanted a door on the front cover. It took me ages to find the right image. When I finally found an image of a door I loved, the photographer wanted more money than I could afford, so I trawled through several hundred more images until I found this one. And I love it! I think it conjures up just the right amount of mystery and menace.

7. So what is your next project and when is it due out?
My latest teen novel, OUTSIDE, is a post-apocalyptic road trip romance set in the near future where everyone lives in closed-off communities behind perimeter fences. When Riley’s sister is murdered, she swears to to track down the killer and goes out beyond the perimeter where the UK is lawless and dangerous. The ebook is out now, the print version will follow later this month.

8. Do you have a daytime job or are you a full time writer?
I’m a mother of two young boys and I try to grab rare moments of peace to write. Otherwise, I scribble with the madness going on around me.

9. How did you get into writing novels and were you worried about peoples reactions to your books?
I used to be a singer/songwriter, but after having children that kind of lifestyle became very difficult. I missed the creativity though and naturally progressed onto writing novels. It’s perfect as it gives me a creative outlet at home.

I initially wrote for myself, so I wasn’t even thinking about other people’s reactions. But when I finally published Hidden I thought I was going to throw up with nerves! It’s like sending your child off to their first day at school. What if no one likes them or they get made fun of? Most of my friends and family have been amazingly supportive.

10. One last thing do you collect anything personally?
I don’t collect them as such, but I do love Emma Bridgewater mugs! They’re beautiful. Oh, and also Paperblanks notebooks – any writers out there should check them out. I swear they make the words flow.


Thanks so much!
Shalini x